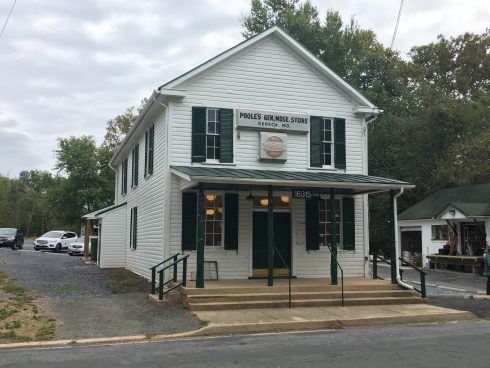 Silver Spring, MD –  Montgomery Parks, part of the Maryland-National Capital Park and Planning Commission, will celebrate the completed rehabilitation of the Seneca Store located in Poolesville on October 19, 2019 with a special ribbon cutting celebration. The general store, previously known as Poole’s Store, dates to 1901 and served the community continuously for 109 years before closing in 2010. Over the past year, the department rehabbed the store to meet all code requirements so that it can be leased to a commercial tenant. All rehabilitation efforts were done by Montgomery Parks Facilities Management staff of professional carpenters, electricians, plumbers and other highly trained tradespeople.  As part of the rehabilitation, Montgomery Parks conducted an archaeological investigation, which uncovered remnants of an 18th century stone mill pit along with two thousand artifacts, such as an ink well, snuff bottles, buttons, intact bottles, and a Victorian Era porcelain doll.

“The Seneca Store served an integral role in the community for more than a century, it not only provided goods and services, but was a central hub and gathering place.  The store was beloved by many, so it was critical to us to ensure it continues to provide a benefit to residents for the next century,” said Mike Riley, Director, Montgomery Parks.

Riley added, “The archaeological findings adjacent to the store were completely unexpected. The mill would have been in operation around the time of the Revolutionary War. These artifacts will be able to help us further interpret some the county’s earliest settlements and rich milling history.”

History of the Seneca Store

The gable-front, two-and-a-half story general store was constructed in 1901 by Frederick A. Allnutt. The Seneca Store became a well-known destination and included the town post office and gas station.  The store remained in the Allnutt family until 1965, when employee Raymond E. Poole took over the business.  The Poole family continued to operate the store specializing in goods and services for local equestrian, hunting and farming communities, selling everything from animal feed and equipment to candy and carry-out food.  Montgomery Parks acquired the property and surrounding buildings in 1972.  The Poole’s Store continued to operate until 2010.  Before it closed, the store had earned the distinction of being the oldest continuously operating general store of this type in Montgomery County.

Rehabilitation of the Store

Montgomery Parks began rehabilitating the building and landscape perimeter in August 2018, including:

The rehabilitation of the store, including design, construction and archaeological excavation cost an estimated $1 million.  The project was supported by the State and Montgomery County, including state bond bill funding, a grant from the Maryland Heritage Areas Authority and money from the Parks Capital Improvements Programs’ Restoration of Historic Structures fund. 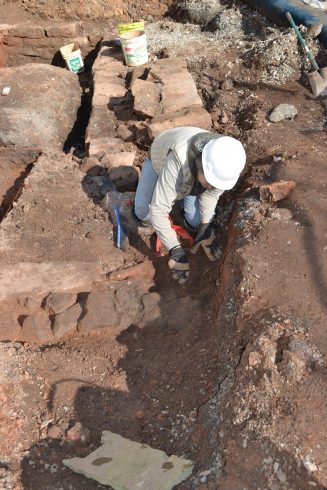 Montgomery Parks was required to conduct archaeological testing wherever construction excavations were planned at this site. During the archaeological investigation, staff discovered a large archaeological feature buried adjacent to the store. Montgomery Parks’ archaeology team, in conjunction with a consultant and volunteers, removed roughly 60,000 pounds of dirt to uncover an 18th-century stone mill wheel pit.  The discovery is unique in Montgomery County. Although there are remnants of other 18th-century mills, few have such intact mill wheel pits. Measuring approximately 16’ x 16’ x 4 1/2’, the pit originally held a wooden wheel which, when water flowed over it, powered the grinding equipment inside the mill.  The mill was demolished possibly to make way for the store.  In addition to the wheel pit walls, 2,000 artifacts were found in the excavated area including an ink well, snuff bottles, and a Jamaica Ginger bottle from the mid-19th century. Other artifacts include, parts of an 1850s potbellied stove, and a Victorian Era porcelain doll. The doll has been identified as a Frozen Charlotte, popular from the 1850s-1920s, which was used to warn children of the dire effects of not dressing properly for cold weather.

Montgomery Parks is hosting a special ribbon cutting ceremony on Saturday, October 19, 2019, 10:00 a.m. to 12:00 p.m. to celebrate the store’s restoration.  Residents are invited to hear remarks, tour the building, and learn more about the archaeological excavation.

Montgomery Parks manages more than 36,000 acres of parkland, consisting of 422 parks. Montgomery Parks is a department of The Maryland-National Capital Park and Planning Commission (M-NCPPC), a bi-county agency established in 1927 to steward public land. M-NCPPC has been nationally recognized for its high-quality parks and recreation services and is regarded as a national model by other parks systems. www.MontgomeryParks.org

Montgomery Parks, part of the Maryland-National Capital Park and Planning Commission, encourages and supports the participation of individuals with disabilities. Please contact the Program Access Office at 301-495-2581 (Voice/TTY), MD Relay 7-1-1 or 800-552-7724 or ProgramAccess@MontgomeryParks.org to request a disability modification. Visit www.MontgomeryParks.org/access for more information.