Updated May 29: At this time, Montgomery Parks is not issuing permits for park athletic fields. To learn more please visit our Permits & Rentals page.

Montgomery Parks' has currently closed all indoor park facilities to the public, our skate park, and the cancelation of all programs, classes, and events through June 30, 2020. To learn more, and prior to visiting any of our parks or trails, we ask that you visit MontgomeryParks.org/COVID-19 for additional information and answers to frequently asked questions. Please enjoy some of our Explore From Home programming and our new Montgomery Parks Trailheads with Parking Map.

The Museum and Park | History | Volunteer

An African American roadside community lived and worked on this historic site from emancipation well into the 20th century. Their culture and traditions heavily influenced those of surrounding communities, and their story is deeply woven into Montgomery County’s rich history. At the center of this site is Oakley Cabin, which was inhabited until 1976 and now serves as a living history museum.

The Museum and Park

Step inside Oakley Cabin and immerse yourself in the history of those who have lived there. The main room on the ground floor wraps around an open hearth, and in a small adjoining room, 19th-century tools and artifacts are displayed. These items were excavated during archaeological digs around the park’s grounds. The two rooms are divided by a bead board partition wall, and a boxed staircase leads to the upper loft. Archaeologists are currently piecing together evidence in an attempt to date the construction of the cabin.

The cabin sits on a 2-acre tract running along Reddy Branch. The mill pond for Newlin’s Mill was located in the low area behind the building. A trail, partially laid inside the old millrace, leads from the cabin to the site of the mill at the intersection of Brookeville Road and Georgia Avenue. You’ll see numerous wild plants here, many of which are edible or medicinal and were used by local people. Hawks, foxes, deer, raccoons, and other wildlife can often be seen from the cabin or trail, which also passes stone quarries used to dig local stone.

Oakley Cabin was originally part of the Oakley Farm, which occupied a portion of Colonel Richard Brooke’s large land tract known as “Addition to Brooke Grove.” Brooke was a Revolutionary War hero known as “the Fighting Quaker.” He built the “big house” called Oakley in 1764, which was destroyed in the 1970s.

Brooke died in 1788 and willed all of his property to his only child, Ann, who later married William Hammond Dorsey. They had five children. Like her father, Ann and William never lived on the Oakley Farm. Instead, William built their home, Dumbarton Oaks, in Georgetown. When Ann died in 1802, William sold all of his Georgetown property and moved to Oakley, where he died in 1818. The Dorseys’ son, Richard B. Dorsey, transformed Oakley into a farm, on which his 23 slaves worked.

Dr. William Bowie Margruder bought Oakley farm in 1836. A local doctor to both white and black families, Margruder owned 19 slaves to help farm the land. Prior to 1879, two more cabins were built on the property, though neither remain. After Dr. Margruder died in 1873, Josiah J. Hutton purchased the farm.

According to census records from 1880 to 1920, between 22 and 37 people lived in the three cabins. The residents were both black and white, and worked as farm laborers, carpenters, blacksmiths, and laundresses. They likely shared household tasks and sold produce and hand-made articles to travelers on the Brookeville Road. The cross-section of cultures found here is representative of the unique African-American folk experience.

Become a Volunteer Docent and bring history to life!

Train to become a volunteer docent or tour guide at Oakley Cabin. Programming at this unique African American historic site centers on promoting awareness of and education about the Reconstruction Era and the free black rural communities that appeared after the Civil War. Learn how these small communities evolved and influenced the culture of the communities around them. 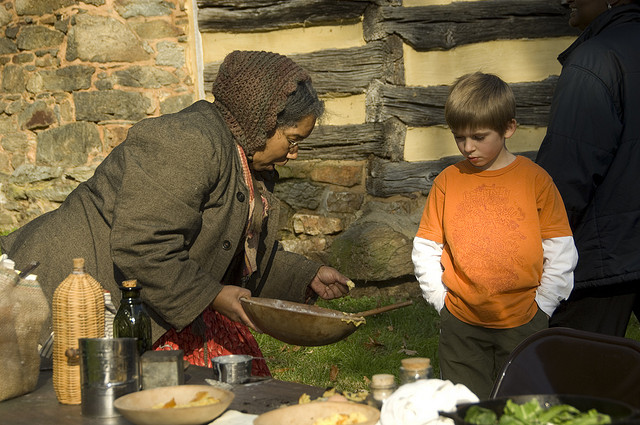 Become a part of history! Come join a terrific group of history lovers and become an Oakley Cabin special-events volunteer. Volunteer to help with hands-on activities or old-fashioned games for children and more during Oakley Cabin’s special events held from April through the first weekend in November. Volunteers are needed at the Opening Day Celebration (April), Montgomery County Heritage Days (June), and the Maryland Emancipation Day Celebration (November).

A portion of the trail is closed on the eastern side due to new construction of the Brookeville Bypass (at which point a fence has been installed). The project is expected to take two years. Please use extreme caution when accessing the trail and do not proceed beyond the fence.

Montgomery Parks is proud to be able to offer group and school tours at Oakley Cabin, one of our most prominent historic sites open to the public. All tours will be presented by specially trained docents who make history come alive.