In Planning In Design Under Construction Open to the Public Archive 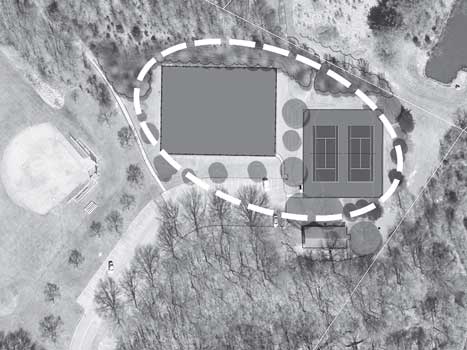 Columbia Local Park is located at 14900 Old Columbia Pike in Burtonsville, immediately adjacent to the Marilyn J. Praisner Community Recreation Center and the Marilyn J. Praisner Library. The 25.2-acre park is bisected by a densely forested stream valley, effectively splitting the park into two distinct spaces.  With significant frontage along Old Columbia Pike, the three basketball courts, two baseball fields and multi-user swing in the southern portion of the park is highly visible and heavily used.  Beyond the forested stream valley, the northern portion of the park is relatively isolated, obscured from Old Columbia Pike by the adjacent library and recreation center.  As such, the baseball field, two tennis courts, and picnic shelter receive very little use as compared to the southern portion of the park.

In addition to the baseball field, tennis court and picnic shelter in the northern portion of the park, three additional tennis courts have been taken out of service, leaving only a large, open paved area surrounded by a ten-foot-tall fence. The purpose of this project is to find a permanent use for the former tennis courts and simultaneously activate the northern portion of the park to make it more inviting to future users and discourage inappropriate activities from occurring.  Because Columbia Local Park is within the Upper Paint Branch Special Protection Area, the amount of impervious surface within the park cannot be increased, and one of the goals of the project is to remove and de-consolidate paved areas wherever possible.

Acquired in 1969, Columbia Local Park was developed in 1974 with many of the amenities that still exist today. In the 1990s, residents began to express interest in repurposing a portion of the five tennis courts in the northern portion of the park for various activities.  Various requests were made for the courts to be converted into a roller hockey rink, skate park, dog park, baseball batting cages, cricket practice facilities, and other uses, but no official action was taken to redevelop the courts.  By 2004, all five of the tennis courts had degraded to the point where they had to be taken out of service due to safety concerns.  In 2005, two of the tennis courts were completely renovated and remain in good working condition today.  The nets and posts were removed from the remaining three courts, leaving an expanse of flat, paved surface, enclosed by a ten-foot-tall fence.

For three weeks during the spring of 2017, a deer camera was installed to capture the usage of all five tennis courts. The camera snapped a photo every fifteen minutes from dawn till dusk and provided insight into when park users were visiting the courts and how the courts were being used.  Not surprisingly, tennis was the predominant activity to occur on the two active tennis courts.  In the three abandoned courts, however, uses varied from dog exercise, cycling, soccer, and baseball practice.

Links to review meeting notes and Planning Board memos will be attached to each applicable calendar event as it is scheduled and completed.

This project impacts these parks / trails.